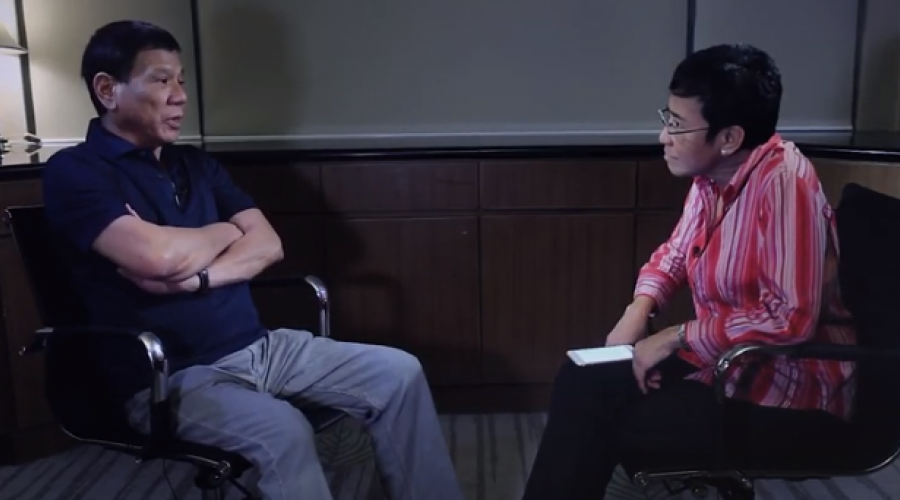 Since taking power in June 2016, Rodrigo Duterte, with the help of a death squad, has killed nearly 30.000 people under the guise of a "war on drugs." Ignoring international criticism and openly admitting the murders he committed, telling the whole world that he did not care what anyone thought, Duterte, almost overnight, turned the democratic system into a dictatorship.

In such a system there is no media freedom and engaging in investigative journalism and sharing true information with the public is becoming an increasing challenge. However, despite the daily threats to her life and work, journalist Maria Ressa and her team from the news platform Rappler in the Philippines, are not giving up the fight to preserve democracy.

Their struggle for the truth and media freedom is the focus of the film We hold the line, by German director Marc Wiese. The film will be screened on Friday, September 11, as part of the Competition Program of the Third AJB DOC.

"Maria represents the struggle of David and Goliath. However, one should be honest and say that she is not fighting alone, as she has a whole team of brave people with her, who are also exposed to various threats and pressures”, says the film's director Marc Wiese.

How long has this documentary been in the making? Can you tell us what the creative process looked like?

First of all, I want to say that it was certainly the hardest for the people who lived there and worked with us, because we could return to our country at any time while they had to stay there. That is the reason why we have never told the authorities what we were doing, that is, what kind of story we are going to tell. We told them we were filming a documentary about the most beautiful islands in the world, which, of course, was a lie. That is why we didn't have any problems, but if they, at any moment, understood what we were doing, they would have surely arrested us and we would have huge problems.

In the first scene of the film, we hear Duterte's confession of the murder. How do you comment that and what is, in your opinion, the reason why people vote for such people?

It's a million dollar question. Simply, all over the world there are people who are hardened racists, chauvinists and homophobes, and who come to power using populism. This is not just happening just in the Philippines, we see the same examples in other parts of the world and it is simply impossible for normal people to understand how such people are in power.

Duterte simply sold the public a nice lie that he would get rid of drugs, much like Trump does in America by promising to make America again the best and strongest world power. All of that is just some kind of show that the wider masses enjoy. As a result, we have tens of thousands of dead who were executed without any trial or chance to prove their innocence.

Duterte fights drugs with bullets, but at the same time we see that his son might have been a key person in drug smuggling. Is Duterte, under the pretext of solving the drug problem on the street, securing the power for himself and eliminating competition?

I wondered the same thing. It wasn’t clear to me how drugs became the biggest problem in the Philippines or why someone would say on television that he was a murderer. I think that Duterte, with the help of Facebook, carefully researched and planned his propaganda, because after his first confession of the murder on television, he became the only topic people talked about. Unfortunately, all those murders and the fight against drugs are just a show for the public, something he entertains the citizens with, preventing them from asking the right questions. Trump does the same thing - says something stupid on Twitter and while the whole world is buzzing about that nonsense, no one is paying attention to what’s actually going on. I am convinced that some of these scandals were fabricated to hide some bigger things. But still, that is very difficult to prove.

Do you think the story of Maria Resse could encourage people living in similar regimes to raise their voices and, at least, try to make some change?

Of course, Maria is an example to anyone who wants to fight for the right values. If we look at history - who, for example, could have believed that a person like Nelson Mandela could bring down apartheid on his own?